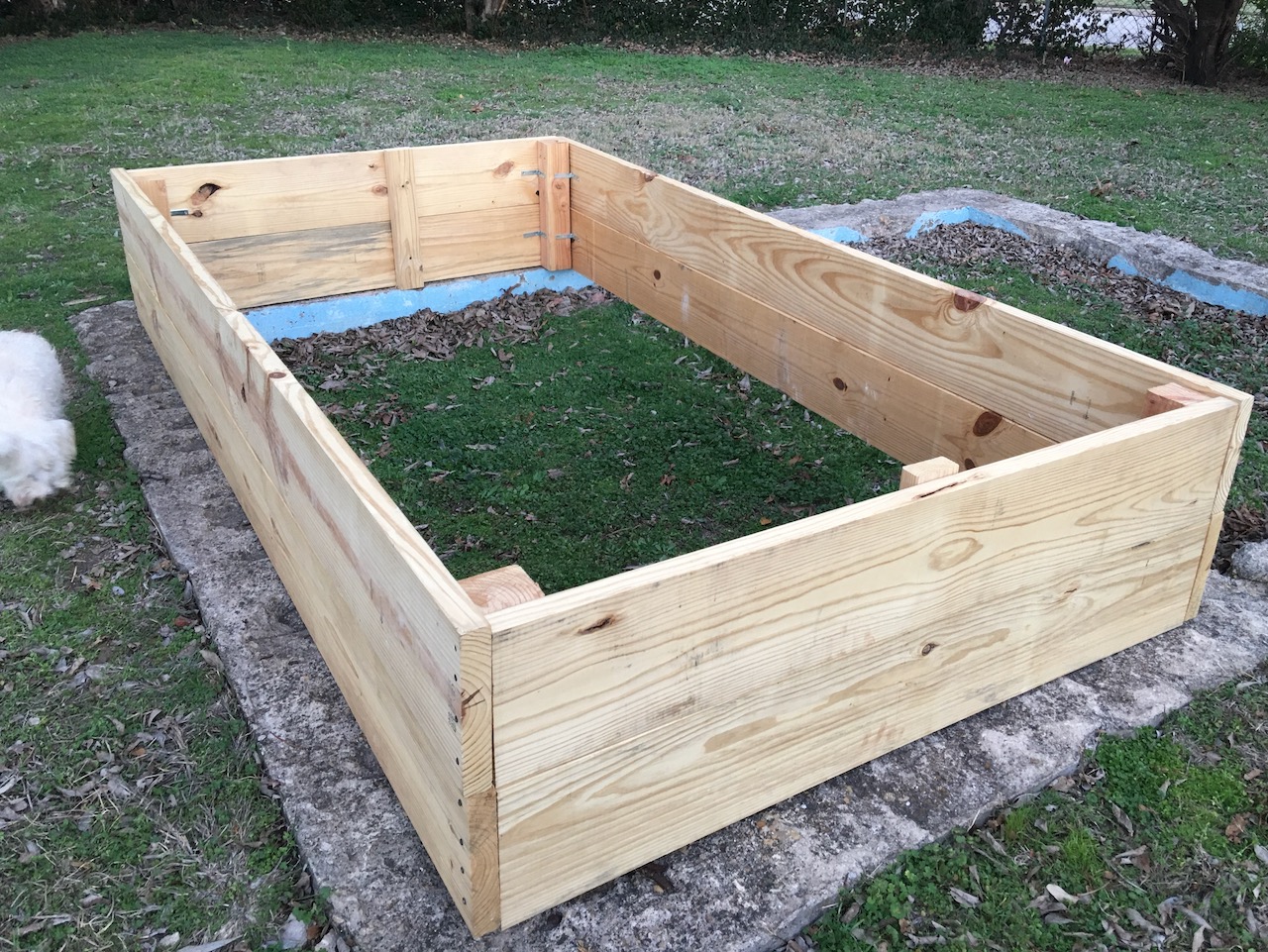 Honestly I’ve never considered myself having much of a green thumb. Every plant I’ve ever tried to grow has died by my own hand, yet somehow I still want to keep on trying. Does that make me an unintentional serial killer?

Nevertheless, I’m super excited about the possibilities of growing our own fruits and vegetables and so is Craig.

Our plan is to have 2 raised garden beds that are 9 by 5 feet in area which gives us a total of 90 square feet of growing space. That’s A LOT of room. Considering we can have 1 or more plants per square foot of growing space, that’s enough to feed a large family.

The two beds will sit on top of the cement fixture. The inside of the fixture is still pretty sunken, so I’m considering filling it with bulk drainage rock to make it level.

I don’t know whether or not we’ll build both in the same season. It’s definitely a lot of work to take on for two inexperienced gardeners. At this point I think we should just build one and get it going, learn from it, and then build the second one later this year. Hopefully by then we would have learned what to do from any mistakes we made with the first garden.

Picking Out the Location

We have a pretty large backyard that gets a good amount of sun during the day. The only thing is that the sunny part of the yard has this strange 10 foot by 13 foot pool structure that was filled in with dirt long before Craig moved in.

Because it’s the perfect spot for a vegetable garden, demolishing it would be too expensive and too time consuming. Instead, we’re choosing to build two 9 foot by 5 foot raised garden beds on top of it. And because we really don’t want to utilize the growing medium inside of it (because who knows what kind of stuff is buried in there), we’re just going to grow on top of it.

According to the Square Foot Gardening Foundation, they recommend only a 6 inch depth of growing space for a raised garden bed, but if you want to grow root vegetables like carrots and potatoes, you’ll probably need at least 12 inches. Since we’re building on top of a giant bath tub essentially, we’re making it 20 inches both for the space as well as the height (to save our backs!).

So the weekend before Christmas we made a special trip to our local home improvement store and bought a significant load of lumber. We were concerned at first about being able to transport all of it home, but thanks to their cutting abilities, and our full sized sedan, we managed to fit all of it into our car and almost got the trunk closed. We had one 4 by 4 that was sticking out but other than that, we got everything else to fit!

There was one concern about cutting the 4 by 4. The store was only equipped to cut planks so we had to find a way to cut this one ourselves. I know my dad probably has one, but I didn’t really want to go on a hunt for a table saw or miter saw in their storage shed. We ended up bringing home a lightweight DeWalt Circular Saw.

Well because we started this project right before the holidays (and also because we’re both pretty new at building things), it took us a few days spanned over a few weeks to finally complete the raised bed.

The idea is to level the pool structure underneath with drainage rock before layering in the bedding soil. I’m not sure yet if I want to put in a layer of landscape fabric first on top of the drainage rock before adding the soil, but considering the unevenness of the cement frame underneath, it will probably be a good idea especially to minimize erosion.

I’m relieved we’re finished with this phase though and I’m glad we only built 1 raised bed for now. This one was indeed a learning experience for us so hopefully the next one we build will be easier.

My seeds are still growing indoors so I’ll post some progress photos on that, but now I can’t wait to start planting!

2 thoughts on “Kitchen Garden Tales With The Adamses”