The weather has started to warm up over the last week and with it came some rain and a few clouds. However, there have been a couple days where I managed to avoid the gym and run outdoors.

Saturday morning was the first time in about a month since I took Izzie out for a run. And although our last excursion was a walk in a small park, this time we went to the bigger park with the longer trail and ran in spurts to kinda get things warmed up.

Wow, what a feeling!

We started out at a slow, easy walking pace. We reached the first bench, where I stopped and did some basic leg stretches. Izzie waited patiently, watching the trail with alert eyes and ears. Then we started into a run.

Running out in the open is so much more freeing than a treadmill. You can’t really deny the benefits of being out in the fresh air as opposed to the stale, sweaty air of a gym. Also, on a treadmill, you’re confined to the 4′ x 2′ rectangular space for your arms and legs to go whereas out in the open you can increase your stride and truly stretch your body to the limits.

So in the first sprint, I ran at a decent pace. Once I reached the next bench, I stopped and did 10 jumping jacks. And then walked to the next bench. At that bench, I stopped and did 10 more jumping jacks, and then broke out into a run, but this time I ran freely, disregarding my pace and my stride. I was practically flying through the air, lifting myself at each step, pushing my body forward so I could cover more distance in a shorter amount of time. I ran as if I was a kid again who was just let out for recess and was racing for the best swing on the playground.

As a result, I think I worked muscles in my legs that I didn’t know I had.

Izzie kept up without any issues or distractions. Occasionally I would look down to my left to check her status, and she was just galloping along, the wind in her face, her ears back. She wasn’t winded, wasn’t tired. I was so proud of her! She kept me motivated. 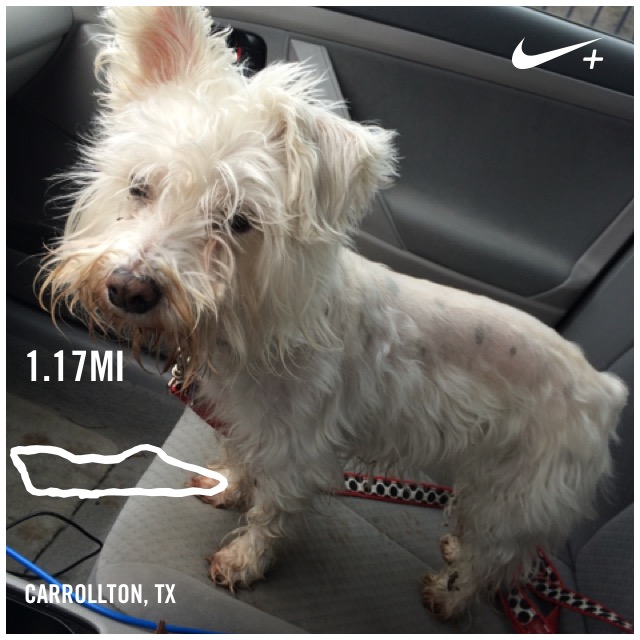 For the first lap, which was half a mile, we continued the alternating pace. But by the second lap, we had to keep it at a steady walk. My quads and my glutes were on fire. I could tell later as I was walking up the stairs to my apartment, that I would continue to feel the burn the rest of the day and on into the next.

I did a mile in under 20 minutes. It was the best time I’ve had in over a month and it was amazing.